Canadians learning about trees from Italians? The benefits of a scarcity mentality

Posted by Terry Etam on January 20, 2019 in Industrial Energy |No Comments 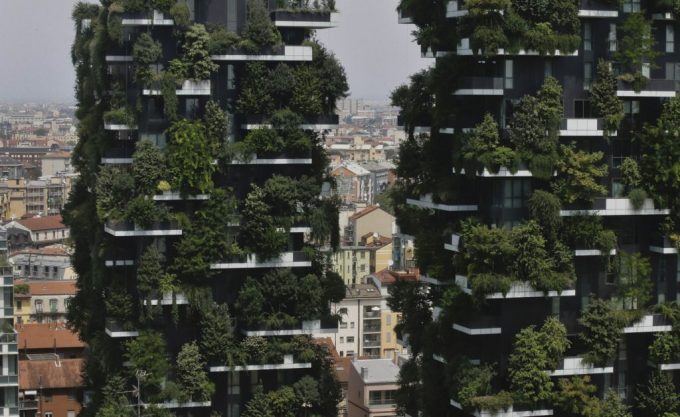 Some years ago, I bought my first house, a townhouse. It was one of those three story open-plan 1970s things with a west-facing back wall mostly of glass and a theoretical mountain view if you stood on a 12-foot ladder in the middle of the living room and twisted your head just right. The back yard was my oasis, a nicely-shaded high-walled 12 foot by 12 foot pen, which with youthful enthusiasm I imagined was actually nice. I bought the place in May and enjoyed a great summer hanging out there, reading and admiring my mortgage.

One August day, I came home from work, unlocked the front door and walked straight into a blast furnace. My world had changed. In the entry hallway I was met with a dazzling brightness and a stifling wall of heat, much warmer than the sunny day outside. It was as though someone had broken in and set up a grow op.

The truth isn’t nearly that exotic; earlier in the day the building complex manager had removed a huge tree that sat just outside my feeble back yard. With that shade gone, the house began baking through those huge glass windows as soon as the sun slid past high noon, gradually turning my previously comfy and satisfying home into a giant glass cube as the sun descended. I no longer enjoyed lying on my couch; rolling over made me feel depressingly like a rotisserie chicken.

I’d nearly scrubbed this sad memory from my head when I came across an excellent story in the Associated Press about a green initiative in Milan. The city is on a massive tree planting kick, planning to add 3 million trees by 2030, and not just for the CO2 credits. The city has a bigger objective than that.

Over here, particularly when talking about the environment, we largely view trees as environmentally beneficial due to their ability to absorb CO2 and help achieve ‘carbon neutrality.’ But trees can do so much more. The Italians figured out what I did though when my shade tree was cut down – a well-placed tree can replace an air conditioner, or several of them for smaller apartments. And that’s not just in the back yard; In the article linked above is a picture of a multi-story building in Milan with interesting balconies and many trees on every floor. It looks like a 12-story Chia pet, but the results are probably outstanding. Imagine the environmental benefits of materially reducing air conditioner usage just through tree planting.

Trees even go one step beyond that from a micro-climate controlling perspective. In winter, trees planted strategically around buildings can reduce heat loss exacerbated by wind chill. On top of that, trees have many other benefits including cleaning the air.

Canada is overrun with trees, as Danielle Smith recently pointed out and if you ever drive across this great country you will see how the waves of them seem endless. It would therefore seem to be unlikely that we could coax yet more environmental benefit out of them, because if we don’t know trees then what on earth do we know. But as the Italians and I learned, we can do vastly more to enhance their environmental benefits. There are many ways we could be utilizing trees to benefit the environment compared to just glaring at their relentless omnipresence (a phenomenon which may sound insane, but try driving across Ontario and you’ll know what I mean).

Now this might sound rude, but if the Italians can…OK let me start again. Canada has an overwhelming number of trees. The sheer number makes us think of those brooding forests as a timber resource first and foremost, because there are so darn many of them, and if destroyed they, under most circumstances, just bounce right back.

But if trees are scarce we might think of them differently. When things are abundant, we take them for granted (such as the natural gas that we rely on to keep from freezing to death). When materials are scarce we can work miracles with small amounts. My brother worked in Africa for years, and came across examples of stupefying ingenuity, where locals would make something of value of out almost anything – a kids’ toy made out of old tin cans, or a pair of wildly strong and sharp tweezers made out of what appeared to be some sort of steel rod from an abandoned car or old colonial jail cell or something.

What if we looked at trees through new eyes like the Italians did, or as the Africans look at anything more upscale than a stick? Sometimes we need a kick in the head, metaphorically speaking, to see things differently. Another lesson I learned when my townhouse turned into a slow-cooker – I’d always thought that shade trees should be planted on the south side of a building for maximum protection from the sun. Turns out this is incorrect; during the hottest summer months sunshine enters only from the east and west. No sunlight comes in south facing windows during the hottest months. The sun will shine in through south facing windows in winter, just when we want it for heat, unless we plant trees in the way – a folly that I am embarrassed to admit how long it took me to understand.

I’m no forestry expert, and I know trees aren’t central to Canadian energy production. But many people are working very hard to snuff out the petroleum industry, and maybe we would give them less of a target if we started doing remarkable things that serve dual purposes.

The oil patch can do unbelievable things miles underground, all controlled from a little control shack or in a far-off city. Those advances benefit recovery of oil and natural gas, but no one sees them and no one sees them as a big societal benefit.

What if we used the same ingenuity and creativity to fully utilize every tool in the tool kit and to maximize that which otherwise goes to waste? What could we do with all the waste heat generated at countless facilities? How many greenhouses could we heat and power and light with that free energy? What else could we do with trees other than plant some mandated reforestation patch?

There will be a troglodyte somewhere that will scoff at ideas like this, and that is their choice. But I suspect most won’t. And at the end of the day the latter group will be the ones that keep our business alive in an ever-more hostile climate.

This article was originally posted on the BOE Report