Posted by Terry Etam on September 6, 2019 in Industrial Energy |7 Comments

A downside to this ignorance can be disdain, where we can afford to scoff at things that sustain us because the attacks do not prevent the benefit from accruing. Think of elitist snobs who mock menial labourers, or some such – the menial labourers keep the world working the way it should, and no amount of sneering from upper economic or academic circles will prevent the janitor from doing their job, or the bus driver, or the assembly line worker.

Lately though, we’ve seen a new and possibly very deadly form of ignorance arise like weeds from the rich organic matter of academic and social engineering circles – the camp that is demanding an immediate end to fossil fuel usage. If these elitists were only setting out to end their own usage of fossil fuels, all would be well. But that is not their aim – they want YOU to stop using fossil fuels, all of you, and they have some decidedly and decadently oblivious means to do so.

New York state is providing a fine example of this potentially deadly trend, one which could, depending on weather patterns, leave a significant pile of frozen corpses. Should you be in one of those elitist “eliminate fossil fuels” camps, you may be screaming at the alarmist attitude. Well, faux-enlightened one, consider this twisted and irrefutable and real and frightening scenario that you have created out of thin air.

New York state has, through the machinations of various environmental activist groups, been successful in blocking construction of any new natural gas pipelines in the state. Yet demand continues to grow, because renewables have no hope of meeting fuel needs, particularly in winter.

As a result, 20,000 new would-be customers have been denied natural gas service because the NY gas grid cannot handle any more customers. Newly-built restaurants cannot open; newly-constructed houses cannot be occupied because they cannot be heated. The natural gas utility cannot afford to add more connections with gas supply constricted; too many users would tax the system to a breaking point should demand spike in cold weather conditions.

In what should be astonishing news but is sadly commonplace, climate activists blame the natural gas provider, stating that they are concocting this situation out of greed. And this stunning foolishness brings us back to the original point: that some members of society can, through sheer ignorance, place their own lives in jeopardy because they have no clue whatsoever as to how a natural gas system operates. Like a toddler crying for milk, they have zero knowledge of or concern for the source; it is always “just there.”

Until one day when it is not, and history has provided a close-by and recent stern reminder. On January 22, 2019, the governor of Rhode Island declared a state of emergency when 7,100 customers lost natural gas service due to very strong demand in cold temperatures that dangerously depressurized the system, causing some deliveries to be curtailed. It was a near catastrophe. “”If you have heat, please, call your loved ones, your church members, anyone in the area, offer for them to stay over at your house. Make sure they have a warm place to stay tonight,” said the governor.

The activists who have blockaded new pipeline construction on grounds that it will help global warming are now putting not thousands but tens of thousands of people at risk, because NYC is, last I checked, considerably larger than Rhode Island.

Which view sounds alarmist, then: to say that without drastic action the planet might warm up by several degrees in 40 years, which will require adaptation; or to say that activists have created a situation in which large swathes of NYC could literally lose their heat source during a severe cold snap within a few months? Is it not astonishing that these activists are willing to gamble the lives of so many citizens in the immediate future, in order to try to prevent possible and theoretical problems decades down the road?

Should a cold snap emerge that creates the same situation as happened in Rhode Island earlier this year, we could quite easily see a catastrophe of such monumental significance that it might actually break through the energy-ignorance wall of climate activists. There appears to be no other way to get them to learn other than to have a great number of people die.

Being ignorant about how your washing machine works is not a big deal in our affluent world. Being ignorant about what fuels the world is turning out to be a potentially very deadly problem. And if NYC’s fuel is cut off in mid-winter because supplies are inadequate, the guilty parties will not be able to hide behind anti-fossil fuel signs.

Get Christmas shopping done early! Even those ungrateful kids will be happy with a copy of “The End of Fossil Fuel Insanity” available at Amazon.ca, Indigo.ca, or Amazon.com. It may well be the best decision you will ever make. 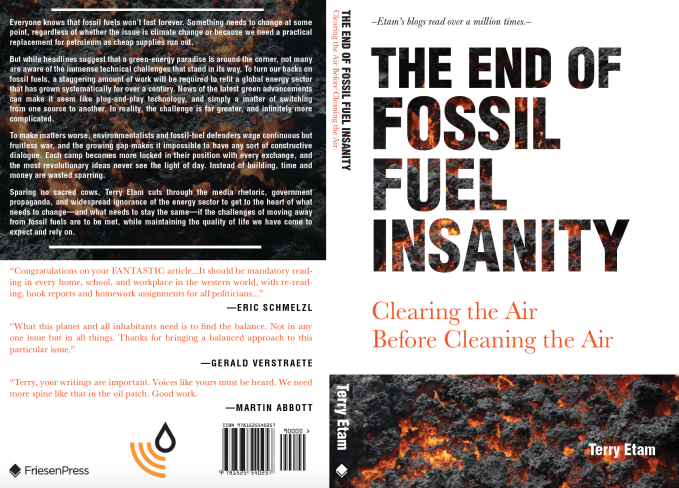