If the environmental movement remains so entangled with the political movement, 2020 will be ugly

Posted by Terry Etam on December 21, 2019 in Industrial Energy |2 Comments

“Though successive Norwegian governments have made it a goal to wean the economy off oil, actually doing so has proven difficult in practice…Greta Thunberg has publicly accused Norway of violating children’s rights around the world because of its reliance on oil and gas.”

What a year for energy. The above quote sort of sums it up.

Norway has a population of 5.4 million people, and 1.1 trillion US dollars in the bank. This wealth is almost entirely derived from oil, one of the world’s most valuable and critical commodities. Norway ranks 7th on a list of purchasing powers, with a ranking of about 75,000 “dollars”.

The Democratic Republic of Congo has a similar population, zero dollars in the bank, and ranks 190th on the same list of purchasing power parity with a value of 800. Congo also has an extremely valuable commodity in cobalt, a key ingredient in the modern battery age.

Two points of interest stand out here. The first is that Norway has found it extremely difficult to wean the economy off oil, despite every tangible and theoretical benefit imaginable, including dumbfounding wealth and a near-perfect “renewable” energy option. Blessed with an abundance of moving water, 95 percent of Norway’s power is provided by hydroelectric.

And they still can’t get off fossil fuels.

The second point of interest is to ponder what lengths the citizens of Congo would go to to have the same standard of living as Norway. How hard can it be to elevate 5 million people?

Extremely hard, as it turns out. And one could cover the entire country in solar panels, and all that would do would be to dramatically increase energy consumption at the times of day when that network would blast out more than anyone could handle, which would create vast new demand for electricity as the country geared up with some subset of what we have in the west, and we would be no further ahead environmentally. For example, here is a snapshot of India’s projected energy consumption growth, which will no doubt require renewables, fossil fuels, nuclear, and whatever else they can come up with: 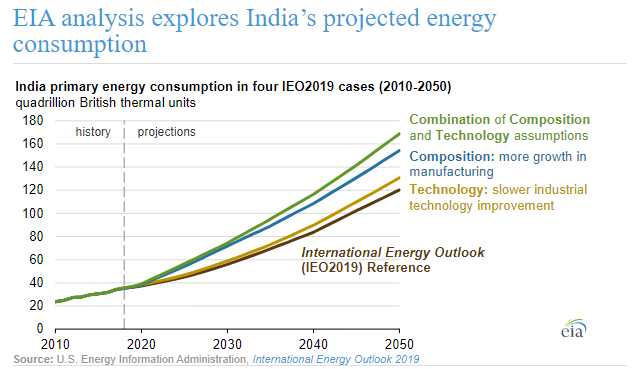 Actually, a third point of interest emerges from the Bloomberg “news” story. Bloomberg is a global powerhouse in the mainstream news flow. In the story quoted, about how Norway is finding it difficult to make green all their investment decisions, Bloomberg sees fit to insert the comment that “Greta Thunberg has publicly accused Norway of violating children’s rights around the world because of its reliance on oil and gas.”

Add these factors together, and it is fairly probable that we are heading for world war III sometime soon.

Norway can’t get off fossil fuels despite having a trillion dollars and 95 percent of their power from a renewable source. The Democratic Republic of Congo, and about 130 other countries representing probably 5 billion people, are desperate to increase their standard of living, which means rising energy consumption. Not just renewables, but all types. Modern life is a rapacious energy hog.

And finally, our public discourse on the climate file has sunk so low, been so manipulated and warped, that a global news institution, in a discussion about the challenges of trying to adapt the richest economy on earth, finds it appropriate to insert a false, political, manufactured, propagandistic quote from an ignorant and used teenager about an alleged human rights violation. The Greta quote is nonsensical on about a dozen levels, it is harmful on about five, and the fact that it is included by a news organization ensures that we will not be making much progress on the environmental file in 2020. We will be lucky to avoid open warfare.

Why warfare? Because the Bloomberg/Greta/Greenpeace/350.org/ ExtinctionRebellion/political-activist axis now controls the entire narrative. And it is irrelevant whether Big Oil controlled it a half-century ago; those days are gone. Now, as Bill Mckibben, founder of 350.org points out, he’s happy that the climate change narrative has moved beyond the environment and become a social justice fight.

Social justice fights do not end well. Bringing the climate into the mix virtually ensures confrontation between those who fear for climate Armageddon and those who are reaching for a better lifestyle. The former club is small in number (globally) but controls the mainstream narrative, the UN, and many western politicians. The latter group contains billions of people who will not be willing to sacrifice either their standard of living or their ambition to raise it. They won’t do it for environmental reasons (about 90% of Canadians and Americans won’t spend more than $500/year to combat climate change; the other 4.5 billion people will spend agree to a proportionately smaller amount), and they won’t do it for social justice reasons. The world doesn’t work that way.

A long time ago this blog was started to talk about energy – what is fracking, how is oil/gas found, what does a refinery do, what is the role of wind/solar in the energy mix, where does your home heat come from, etc. Those are the realities of the energy world that we live in. But those discussion topics have been swept out to sea like a beach bar after a tsunami. Rational energy discourse has been replaced by stupefying comments in the news from the likes of teenagers who have the world’s ear, who have been trained in the art of the bombastic sound bite, but know nothing about the realities of energy. Or life.

If we don’t figure this out soon, it’s going to get ugly.

But let’s put that pile of philosophical/sociological/epistemological dogshit aside for a second. I’d like to say thanks to the many, many visitors and readers for the support. The support and feedback is greatly appreciated. I learn a lot from informed readers; the energy world is so massive there is always another corner to investigate. Let’s hope more and more people get curious too.

Think we can ever live without fossil fuels? Pick up “The End of Fossil Fuel Insanity” and learn what the answer really looks like. Hint: sensationalistic media does more harm than good! Available at Amazon.ca, Indigo.ca, or Amazon.com. Happy holidays!